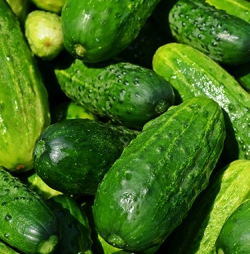 Where do Cucumbers go to find a date?

The Cucumber is a vegetable from the gourd family that is believed to have originated in India. There are three main varieties of Cucumber: “slicing”, “pickling”, and “burpless” cucumbers. Cucumbers are believed to have originated in South Asia, but today, they can be found growing in countries throughout the world. The juicy, crisp Cucumber can give your recipe the hint of freshness you might be looking for!

We can source Cucumber in the following formats: