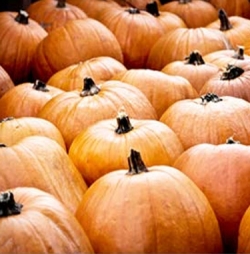 When is a pumpkin not a pumpkin?

When you drop it; then it's a squash!

The Pumpkin is believed to have originated in North America.  The oldest evidence of Pumpkin seeds dates back to 7000-5500 BC in Mexico. Pumpkins belong to the squash family, and were used by Native Americans as both food and medicine. Approximately 95% of Pumpkin cultivated for processing is grown in Illinois.

We can source Pumpkin in the following formats: