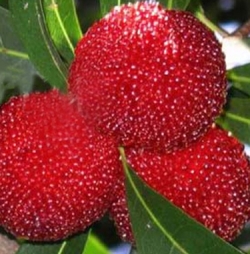 The Yumberry tree is native to eastern Asia, and is grown primarily in parts of south-central China. Yumberries have been cultivated in China for at least 2,000 years. The tree is considered very beautiful, and is used to adorn streets and parks in China, as well as many gardens across the country. The Yumberry tree produces a small, crimson fruit that has a sweet flavor to it. Originally known as the Chinese bayberry, the Yumberry acquired its name when an ambitious importer from Indiana coined it the Yumberry, in order to make it more marketable. The Yumberry remains extremely popular in China, where twice as many acres of land are devoted to growing the fruit as the number devoted to apple orchards in the U.S.

We can source Yumberry in the following formats: